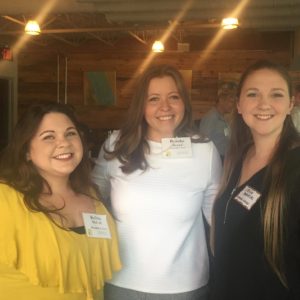 Reynolds and Associates is proud to be a leader in the Greater Heights business community. As

part of our commitment to growing our presence in this area of Houston, our team attended an

on Tuesday, June 6 at the historic Harold’s Restaurant located on W. 19th Street. This building

restaurant and meeting location for the business community.

month. And, Harold’s Restaurant has become the premiere location to connect with other

At the event on June 6, there were 60-80 attendees representing numerous companies in the

area. The format of this event has been key to growth.

This Networking Event is a Step Above

other business leaders. Whereas typical networking events feel impersonal and awkward, the

The meeting space at Harold’s Restaurant features about ten tables, and attendees draw a

number to determine which table they sit at. At each table are topic cards to get the

At the June 6 event, the topic was about web and cyber security. This prompted discussion at

each table about what security systems companies use, how much it costs, and other related

At the April networking event that Reynolds and Associates also attended, the topics followed a

different format with multiple, broader questions to get conversation started. Now that the

Noontime event has expanded to every two months, there is growing excitement to see what

the topical format will be at each meeting.

The Noontime series also includes a speaker at each event. This month, Dignity Memorial was

represented. The speaker at the next event was determined by a drawing, creating an

opportunity for a local business to be represented at the next gathering at Harold’s Restaurant.

half of the year. We would like to thank the Greater Heights Chamber of Commerce for

committed to this important area of Houston.