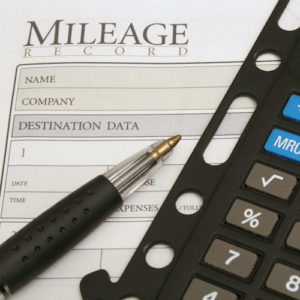 Beginning on Jan. 1, 2017, the standard mileage rates for the use of a car, van, pickup or panel truck are:

The business mileage rate decreased half a cent per mile and the medical and moving expense rates each dropped 2 cents per mile from 2016. The charitable rate is set by statute and remains unchanged.

These optional standard mileage rates are used to calculate the deductible costs of operating an automobile for business, charitable, medical or moving purposes.

Taxpayers always have the option of claiming deductions based on the actual costs of using a vehicle rather than the standard mileage rates.

A taxpayer may not use the business standard mileage rate for a vehicle after using any depreciation method under the Modified Accelerated Cost Recovery System (MACRS) or after claiming a Section 179 deduction for that vehicle. In addition, the business standard mileage rate cannot be used for more than four vehicles used simultaneously. Call if you need additional information about these and other special rules.

If you have any questions about standard mileage rates or which driving activities you should keep track of as tax year 2017 begins, do not hesitate to call the office.